The Rock Over Cena, What Next?

Posted on April 2, 2012 by Aristidis Marousas

WrestleMania 28 has come and gone. The dust has settled, and the results are in.

The winner of possibly the biggest main event in ‘Mania history, The Rock vs John Cena is…

I’m kinda, sorta happy with the result. Yes, I wore a Rock shirt whilst I was watching The Show of Shows at a Buffalo Wild Wings. Yes, I chanted “Cena Sucks” during the back and forth chants. Yet, all I truly wanted was a good showing. Part of me actually wanted Cena to win.

Most people who tried to figure out the outcome from an unbiased perspective, saw Cena coming out on top.

I was one of those people!

Would it not make sense to have the man that, for better or for worse, is the face of the company to come out on top despite all the “haters” and “rise above”? Why have The Rock, although one of the greatest, win if he isn’t a full time superstar?

What does it say when the guy who hasn’t wrestled one on one in about 7 years pins your company’s main guy to the mat and picks up a clean victory? 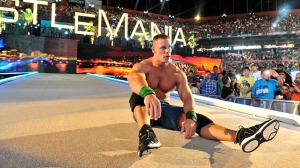 True, it was Rock’s home town. But Cena has/had everything to lose by not winning that match. Does this mean that everything The Rock said about Cena was true? Is he really just this “boy”?

I’m no member of the Cenation, but I respect the guy. If he won it would “validate” all his hard work. Super Cena triumphs over the greatest and most Electrifying star to come out of the Attitude Era (Stone Cold, aside)! Cena was billed as an “underdog” afterall, however ridiculous that sounds.

The greatest grievance I have is… Now what?

If Cena won, Rock would shake his hand and say the better man won. Maybe even challenge Cena for a rematch at Summerslam. Life and storylines would continue and it would be business as usual.

Cena did not win, though. So the handshake could still take place, with Cena admitting the better man won. Cena would apologize to his loyal fans, tell them he gave it his all. But too bad his all wasn’t good enough. Many people will get all excited and started screaming “CENA HEEL TURN OMG CENA HEEL TURN”. Maybe. I don’t see it as necessary. He is a good role model for kids and, let’s face it, he is for all intents and purposes a tweener, or at least in some weird twilight zone between face and heel. Each fan decides how they want to react. Fair enough. I do not necessarily agree with this, but I’m not calling for a full fledged heel turn. After all, he debuted another corny (lame) tshirt that kids will love.

The only thing I can see happening, unless we’re thrown some weird curve ball is this:
Cena apologizes to the fans, congratulates The Rock. Talks about how disappointed he is, not because he lost the match, but because he let down all of his fans. He gets emotional. Says something along the lines of “I guess I’m not the guy I thought I was/ I guess I’m just not as good as I thought I was”. Then begins his storyline slump. His confidence is gone, he loses matches, no focus. This will go on until The Rock comes back after a few weeks and tries to snap Cena out of it. The Rock tells him, even though he won, he underestimated John Cena. Then maybe they set up a second match at Summerslam. Either that, or another superstar tries to “wake up” John Cena. Before you know it, Cena gets that fire back and everything goes back to normal.

I can not see anything else logical that could happen. Then again, Vince is going senile… If you can think of another way they can go with this, please feel free to comment and tell me your idea!

WrestleMania 28 was awesome to watch, though there were some things that truly bothered me. Biggest issue being Daniel Bryan getting squashed in about 18 seconds. If they wanted a squash like that, they should have had Big Show knock out Cody Rhodes in 2 seconds to become the shortest title match ever. It would have gone great with the storyline since Cody has been embarrassing Big Show, only to lose in a squash. Oh well, they’ll learn eventually… Right?

Regardless, I’m looking forward to Monday Night Raw Tonight to see the WrestleMania backlash (remember that ppv?). Especially since it is rumored that Brock Lesnar might make a return appearance!

Well, that’s my rant on The Rock vs Cena match. Again, WrestleMania 28, as a whole, was absolutely great to watch (especially in the company of other rowdy fans). Hope you enjoyed the show AND this article!

← In Lieu of the Preemption of the Radio show…
How Should WWE Developmental Really Be Changed? →