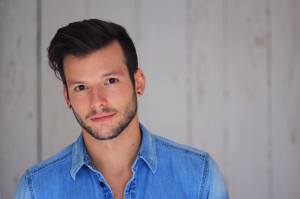 Tom McGovern is a comedic actor, producer, and multi-instrumentalist. He is gaining an audience through his highly entertaining SnapChat Sketches.

Below is an interview we conducted for the short documentary series, Experience.

When did you realize you wanted to be an entertainer?

“I fell in love with performing in middle school when I started singing in choir, but I didn’t know I wanted to pursue entertainment professionally until college. Even then, it took me a couple semesters to change gears – I studied journalism at Temple for about a year and a half before I changed my major to theatre. There was a pretty weird moment when I was reading a journalism textbook in bed, and the inspiration hit me like a bag of potatoes. I dropped the book and hopped online to view the theatre curriculum. Went to guidance the next day and started the process. Best decision I ever made.”

What drew you to comedy?

“Comedy always seemed like more fun and less pressure than dramatic acting. Especially having gone to theatre school, I was seeing dozens of insanely talented actors discover some super intense emotional depth in class and on stage. These people were sobbing in each other’s arms at the end of a practice scene, and I was in the corner of the room thinking about the best way to make my face look like a thumb.”

What inspired you to become a multi-instrumentalist?

“I think it was more of an environmental thing than an inspiration. I grew up with a circle of friends that all enjoyed playing music, and we were lucky enough to have a buddy with a basement and a good amount of gear. We’d spend almost every weekend in Nick’s basement messing around with every instrument we could find. Between all of us, there were more than a handful of acoustic and electric guitars, bass, drums, a full PA system, and a keyboard. We played a ton of awful My Chemical Romance and Chiodos covers, but we all got pretty good at hopping around instruments.”

How did you come up with the snapchat sketches?

“Snap filters blew my mind a bit when they came out for the first time. The fact that they were able to change your face and add effects reminded me a ton of animation, and in my mind, the filters essentially create characters for you. I would wear a filter and experiment with voices, and then I’d just start saying dumb things in those voices while wearing the filters. And to be totally honest, this part of the process was especially easy to do when I would smoke weed, because I was able to say stupid things and make strange sounds without feeling like an idiot. That’s how I found “snuffguffler” in the Little Brothers sketch. Once I starting thinking about filters as a tool to create characters, the idea of a fully developed sketch seemed like a no brainer.”

How did you feel about the positive reaction and success of your snapchat sketches?

“So psyched, man. I would keep making Snap sketches if they got 15 views, let alone a few thousand. The response on Facebook and YouTube has been so friggin’ cool. I get such a kick out of making these videos, so to see other people enjoy them too is all you can ask for as a creator.”

What projects are you currently working on/looking forward to?

“I’m currently working on a Holland America cruise ship as a piano player in a show called Billboard on Board. It’s a dueling piano show sponsored by Billboard. My partner and I play cover songs six nights a week for a few hours a night while we sail around the Pacific Ocean. Totally loving this gig.

Looking forward to building my first 5-minute stand-up set. I really want to start working the open mic circuit in NYC with a musical-comedy stand-up gig. I’ve had this idea for a long time where I have a rap-battle with a bluetooth speaker. Sounds absurd, but I have an idea as to how I think I can execute it. Definitely going to have that bit written by the time I get off the ship.”

Who are the top 3 artists/entertainers that inspire you today?

“Donald Glover. The dude does it all – writer, actor, producer, rapper. That’s the dream. He’s got an incredible vision, and I admire him deeply.

Kyle Mooney. I think he’s the unsung comedic hero of our generation. YouTube content on his channel “kyle” and his collab channel Good Neighbor Stuff is some of my favorite sketch comedy of all time. The fact that Kyle and Beck have been able to bring their comedic style to the national stage on SNL is a miracle, too.

Bo Burnham. Musical comedy is a world that I really terribly want to explore, and I don’t think many people do it better or more creatively than Bo. If you don’t know who Bo Burnham is, please stop reading this and find his specials on Netflix.”

Name one small goal and one stretch goal you currently have.

“Small: Learn how to play “Scenes from an Italian Restaurant” by Billy Joel.

Stretch: Over the past few months, I’ve set my sights on a mockumentary-style episodic series that follows the happenings of a dueling piano bar. I really love the idea of a show like The Office or Parks and Rec that’s grounded in the context of the bar-music scene. I’ve finished the first draft of a demo episode that I plan to film over the summer, and I’m in the midst of writing the full pilot now.”

What do you love most about what you do?

“Being able to make people laugh without being a jerk to anybody is one of the few things that makes me feel like I’ve made an actual impact on a day to day basis. To spread positivity through comedy and music is the ultimate goal, so to see people enjoy themselves while watching my content or listening to a piano show is a very, very cool thing. Life is good.”

Join 342 other followers
Follow The Motley Experience on WordPress.com