Is the Electoral College Still Relevant?

The dust has settled and the new President of the United States will be Republican candidate, Donald Trump.

This result left many Americans, as well as people across the world, dumbfounded. Even some Trump supporters did not believe their candidate could really win the election.

To add to the controversy of what has become the most polarizing election in recent memory, is how Trump won the electoral votes but not the popular vote. 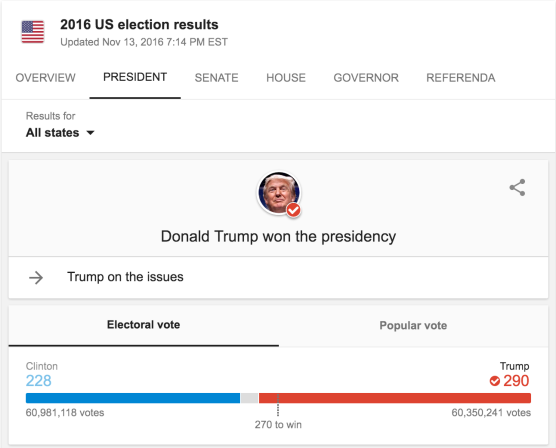 This is not the first time that the winner of the US Presidential election did not win the popular vote. However, due to the high unpopularity of Trump, the outcome of the election has sparked an outcry from some voters.

Many are even calling for the end of the Electoral College system.

Should this happen? Is the idea of an electoral college outdated in today’s society?

To answer this question, let’s take a quick look into the creation of the electoral college.

Article II, Section 1 of the US Constitution states:

Another way to think about it is that electors are middlemen that are affiliated to political parties.

So if the majority of the population in a given state votes Republican, each electoral vote that the state has (which is calculated by the number of Senators + Representatives) is given to electors affiliated with the Republican party.

It is a bit convoluted, to be honest. One of the original reasons for having this system is because the Founding Fathers did not trust the American population to make an educated and informed choice on who should lead the country as President.

Let’s not forget that, during those times, there were still serious class divides: slaves, farmers, merchants, and wealthy elite. Illiteracy was an issue, as well as lack of reliable methods for the transportation of information.

Another possible reason is that the electoral college system favors the idea of states being able to represent themselves, which was a big issue during the early days of the nation.

What I mean by this is, the residents of California have different perspectives and needs from those of Texas or Maine. So by having each state send their respective number of electoral votes, votes for the President of the United States can reflect the wishes of each state.

This allows states with less urban areas and sparser populations, such as in the midwest, to have a fighting chance at having their Presidential choice selected.

Trump relied on many of these “flyover states” to lend support as they tend to share many of the same demographics and social/economic concerns.

Clinton focused mostly on the urban areas that, while populous, could not lend enough electoral votes to her election bid.

Electoral votes provide the will of the nation at the state level, favoring the candidate with the majority vote in each state. This essentially negates the votes of citizens who support a candidate that does not win a majority within each state.

The popular vote captures the will of individual citizens, so every vote truly does count. The drawback is that the majority of citizens live in or near urban areas which tend to be on the eastern or western coast of the nation; citizens in the middle of the country are then at risk of being ignored.

It is therefore up to you, the reader, to decide what is best for America. The Electoral College certainly has its flaws, however relying solely on the popular vote lends its own issues.

It is also important to note that any changes to the voting system need to be done by way of a constitutional amendment. To do this, Congress must introduce the amendment. The amendment must then pass by at least a two-thirds majority in both the Senate and House of Representatives.

I am sure you can imagine how difficult it would be to amend the voting process for President of the United States, without serious public support and pressure. So it is not very likely to occur any time soon.

In the meantime, in order for our election process to be inclusive, it is up to politicians and candidates to reach out to every American; to hear and understand the needs and concerns of all, and not just those in areas that can yield the most electoral votes.

Join 342 other followers
Follow The Motley Experience on WordPress.com