Short Story: The Man, The Mountain, and The God

Posted on October 5, 2016 by Aristidis Marousas 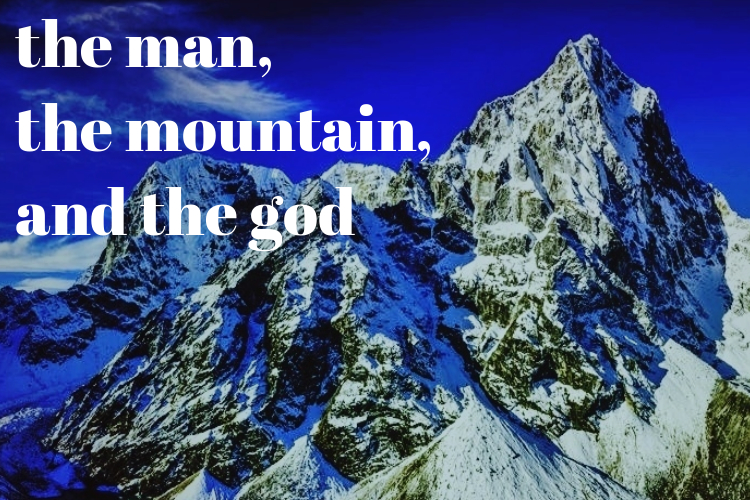 The old stories always told of the mountain.

The mountain where the god lived.

In some of the stories, he was kind.

In others, he was vengeful.

Which of the stories was true, the man wondered.

He had asked this question aloud once, at a harvest feast when he was a child.

The elders gave him a scolding look.

“We do not question the ways of our god”, they told him.

Being quickly shuffled by his mother back to his bed, he never got an answer.

The mountain was clearly visible today. Except for the peak. The peak always seemed to be concealed by clouds. Sometimes as white and fluffy as the fleece of sheep. Other times as dark and grey as the hide of a wolf.

It was good that it was a clear day. The man had been planning for weeks, and did not want to delay any longer.

He had told his family that he was going hunting. The seasons were changing and they needed meat to store.

The man said goodbye to his family as casually as he could, as he did not want to alert them that this trip was more than a mere hunting excursion.

After his farewells, the man left his village. To climb the mountain. To meet his god.

It had been five days since he had left his village. Soon, his family and friends would grow concerned over his prolonged absence. They may even send out a search party.

He realized that if he became injured, or worse, they would never find him. They would probably assume he was attacked and eaten by some predator. He would become a cautionary tale to children.

The reason for this being that the people revered the mountain so much that it was forbidden to even go near it.

His current view of the valley from his ledge was beautiful. He could see his and neighboring villages from this vantage point.

“To think, I am only halfway up”, he said aloud. To no one, except maybe his god, he mused.

I wonder what he thinks of me, the man pondered.

It was cold at this altitude.

The man has prepared by packing his winter clothing, but still shivered.

He was about to climb into the bottom layer of cloud that encircled the peak of the mountain.

He hesitated. No mortal eye had ever seen what he was about to see.

At that realization, a smile spread across his windburned face.

Reaching out with his right hand, he continued to climb.

The man could not see more than a few feet in any direction.

The clouds had begun to darken, which he took for a bad omen.

“Perhaps he is angry with me!”, he had to yell out to hear his own words over the wind. They were still nearly inaudible.

His hands, now bloodied from the elements and the rough surface of the rock, continued to find nooks and crannies he could use to pull himself up.

Thankfully, there were enough ledges wide enough for him to find purchase on so that he was not dangling off the side of the mountain.

He stopped on one such ledge to sip some water. The pouch was more empty than it was full, so he had to be frugal with how much he drank.

Exhausted and sore, he sat with his back to the mountain. Looking skyward and taking a breath, he had to blink at ray of sunlight that was peaking through the clouds.

Twisting around to get a better look, he noticed he only had another 40 or so feet to the very top of the mountain.

With his energy revitalized, the man climbed the mountain.

“I meet you soon, god!”, he roared with excitement, defiance, and fear.

Using his hands, forearms, and elbows, the man crawled onto the top of the mountain.

He lay there, on his back, breathing deeply.

Looking down, hoping to see his village, the man saw only the veil of the clouds. Only when the wind shifted, did he catch fleeting glimpses of the valley. The lush green was giving way to the yellows and oranges of the coming season.

Standing on his two feet, he surveyed his surroundings.

There was nothing, save for a nearly bare shrub struggling for existence.

“Is this the home of a god?”, he called out with a shaky voice.

A loud and sudden rumble of thunder surprised the man, making him jump.

Turning around, he was taken aback by a bright light rising from beyond an outcrop of rock.

The man, mouth agape, looked on in wonder as a figure materialized from the light.

The figure appeared to be that of a tall man, each muscle well defined, naked and hairless despite the near-freezing temperatures.

There was no emotion on its face. Or was there?

Is that sadness, the man wondered. His awe was now giving away to curiosity. He had dared not look into the god’s eyes up until this point.

As another loud and rolling rumble of thunder echoed around the mountain, he raised his eyes.

The man looked into the eyes of his god.

The god looked into the eyes of the man.

A flash of lightning bathed the scene in white.

The god was no more.

The man was no more.

The man was now god.